Red Bird is the main protagonist in the Angry Birds series of games created by Rovio Entertainment. He is also the leader of the Flock. First introduced in 2009, the character is the primary bird used in marketing to promote the series. Red is a Desert Cardinal. Red is the first bird used in the game, and he has appeared as a playable character in every version and episode of the game released so far, though he is not necessarily in all levels. In the Fuji TV exclusive episode: Sakura Ninja, he appears dressed as a ninja. This was the first time he has appeared in costume in any game (this is technically not completely true, because in both golden eggs in Go Green, Get Lucky in Angry Birds Seasons, he wears a green leprechaun hat), and completely new game sprites were created for this episode. He can be considered the unofficial mascot of Rovio and the official mascot of Angry Birds. 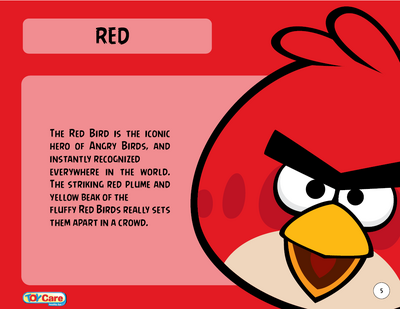 Red is very responsible and eager. He also cares for the eggs, and sometimes dresses them up by putting a cap on them to keep them cool, making him the one with the best caring skills. His best friend and confidant pal is Chuck. He regularly reassures and encourages his friends. He is also known for being a strong and responsible leader and for never giving up on protecting the eggs from the Pigs.

He is an starter character. He was the first bird seen to have it's own car and get help from the Mechanic Pig.

He uses a speed boost.

He is on the very bottom on the Lower Section.

Red is mostly red on his body except for his torso, which is a whitish brown color. His beak is mostly yellow and he has dark red markings. He has black eyebrows.

He appears in the episodes below: