Stella, the Pink Bird is a bird that first appears in the Angry Birds Seasons episode Back to School, released on August 16. She is the second to be a playable female, after the Matilda (third if one counts Jewel from Angry Birds Rio), and the first new playable bird to be female that wasn't part of the original Flock.

As Stella likes to blows bubbles, she may be a young member of The Flock. She shows signs of being childish, but also very cunning, as she quickly thwarts the pigs' plans before they can launch them. She gets enraged easily, but is very happy when not. It was revealed in the Angry Birds Hatching a Universe and other media that she is a teenager. She is stubborn and unruly, and hates being told what to do.

She is the first character to be unlock in the game and in Seedway. When racing against her in Champion Chase and is she is ahead of you, she would blow bubbles to slow you down.

She covers herself with a big pink bubble that protects her from any possible damage and swoops coins and fruits within its radius.

She is located on the Lower Section next to Red. Her resting place can be recognize by her mirror and clock.

Despite appearing in several trailers for Season 1 and the Meet the Flock special, she never appeared in the series but to make up for her not appearing in the show, she appears in her own spin-off show. 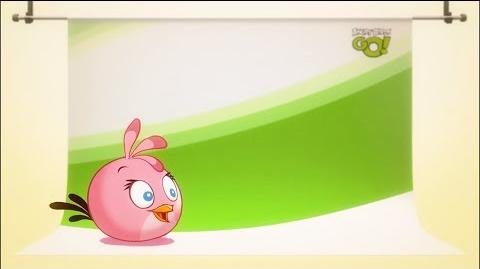