Terence, the Big Brother Bird is a character in the Angry Birds series of games created by Rovio Entertainment. He was first introduced in 2010 and was the second new character added to the game who was not one of the original five birds in the Flock. An entire episode was dedicated to his introduction. In the Fuji TV exclusive episode Sakura Ninja, Terence appears dressed in a Sumo costume. This was the first time he has appeared in costume in any game, and completely new game sprites were created for this episode. 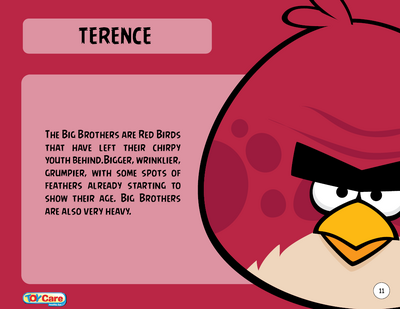 Terence is dull and lazy but cares about the Flock and other rare birds, guarding the eggs and stopping the Pigs from stealing the Birds' eggs. Terence is socially awkward, as seen in the Space video, when the Birds gather around the eggs and he sits alone in the forest. However, he can be counted on to fight the Bad Piggies when needed. His immense size makes him a veritable wrecking ball to the Pigs' fortresses. The Flock doesn't try to control him and often will just get out of the way and let Terence wreck destruction. Terence is friendly to his younger brother Red, but prefers to stand alone and keep to himself. Red is the only bird with whom Terence has a special relationship.

He doesn't enjoy being angry, but his deep-seated pig hatred makes it an inevitable, albeit unpleasant, part of life.

He is the final character to be unlock in Rocky Road. To slow down the racer, he throws boulders behind him.

He creates storms that shock nearby racers; the storm appears to be weaker than Bomb's explosion, though.

He is one the very right.

Terence is the largest of the birds and also (surprisingly) the fastest. In a race with Chuck, Bomb, and The Blues, he kept appearing in places ahead of Chuck and eventually won the race. He also doesn't like to be moved, but doesn't mind holding plants. He is also extrodinarily strong being able to survive a TNT explosion. He is also the older brother of Red.